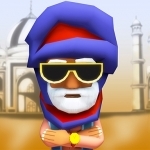 Run along the craziest scenarios in the East City. Drag to jump or slide and to move left or right. Avoid hitting obstacles. Run around the East City, subway and gather all the coins you can. In Desert Prince, you can choose among 4 different characters to play with. Also, you can customize your virtual surfer of choice by purchasing thematic skins! Use WASDu002FArrows or mouse. Desert Prince Runner is a terrific game which you can play for free in in friv-2021.com. With Desert Prince Runner game, we supply many cool Friv 2021 games to play at no cost.

Use Left Mouse button to Play